Humanity puts aside its differences to focus on repairing Earth’s climate, resulting in a climate-first society 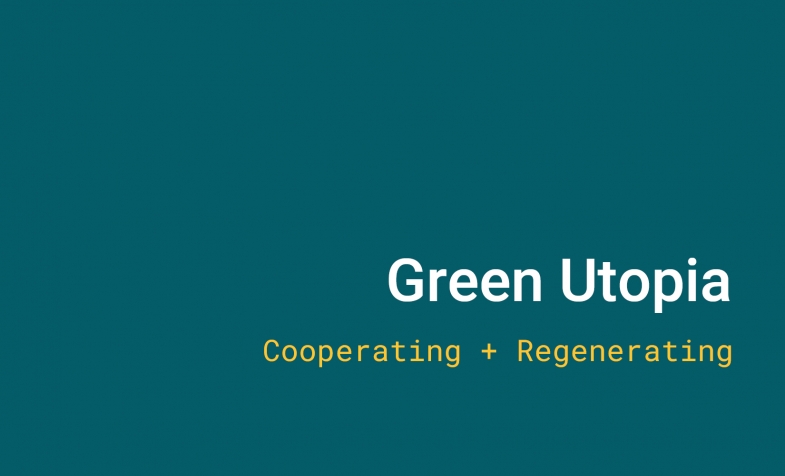 Humanity puts aside its differences to focus on repairing Earth’s climate, resulting in a climate-first society

Green Utopia is defined by an urban fabric that is blended with natural elements and cooperative work environments that promote relationships and collaboration. Scroll down to read the story of Sage, an operations manager for an urban farming company, for a taste of what we think the workplace in a Green Utopia future may be.

Dripping wet from the morning’s spring rainfall, Sage boarded the electric minibus which would take her downtown to FarmStax, the urban farm towers were she worked. Sage was an operations manager for the company, which meant it was her job to ensure that the crops grown in her tower reached co-ops and restaurants all over the city. On a rainy day like this, Sage typically opted to handle most of her work from home or from one of the rentable offices in the coffee shop down the road. However, today looked to be more production-heavy and necessitated her on-site presence.

As the minibus glided down the freeway, the downtown buildings began to grow taller and more closely packed — as did the many trees and their budding foliage. Years ago, the city funded a massive carbon sequestration effort which had led to the greening of the city. Sage was too young to remember the city before it was filled with lush vegetation. She couldn’t imagine it any other way.

On days like this, Sage was grateful that FarmStax had subscribed to a robust shared office package through a co-working subscription service. Her team had 24/7 access to the very best in-office amenities, including virtual meeting spaces and gallons of coffee. FarmStax used to have its own dedicated office space, but with so many employees working from home or other, more convenient locations, the company now lets a third party manage these spaces. This saved FarmStax money and gave employees flexibility, while still keeping a convenient on-site location if needed.

The minibus dropped Sage and a few others off at FarmStax’s central tower before speeding away. Sage strode under the greenery that covered the wide-open entry to the workspace and found a spot at a long table populated by a diverse set of workers, including her programmer friend, Jasper. Jasper and Sage had become fast friends last summer after riffing on an idea for automating zucchini shifting to avoid ground rot. Connections like this were common, as the mix of workers in the shared office meant a lot of cross-pollination of ideas.

After finishing her paperwork for the day, Sage took the stairs up to the zucchini production level. Here the tower’s façade opened to the city, the greenery of the crops intermingling with the shine of the structures beyond. As she reviewed the yields, Sage paused at the data terminal, a smile growing on her face as she confirmed her suspicions – production had increased by eight percent over the previous period. It occurred to her that all this mixing was really creating something special. Whether it be the blend of the urban fabric with the natural world, the combination of professions in the workplace, or the diverse set of friends living with her at the co-op housing, Sage was happy to be part of it all.