A Decade of Collaboration in the South Bay 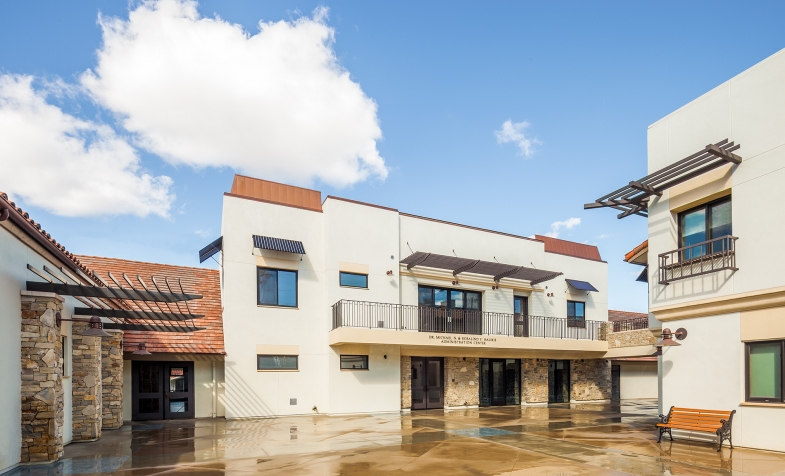 A Decade of Collaboration in the South Bay

A Story in Three Acts
Broken up into three separate phases over ten years, Cuningham Group’s work with St. Katherine began as a series of renovations to the church’s existing facilities, including an improvement to the building’s disabled access points. St. Katherine’s proud history and strong presence in the surrounding community is evidenced during Redondo Beach’s annual Greek Festival, during which the church becomes a center for celebrating Greek cuisine and culture. However, the church’s facilities had become outdated and perfunctory, lacking any design elements commonly found within the Greek Orthodox tradition. As such, the previously completed master plan, done by Bill O’Dowd of BOA Architecture, included the incorporation of many of these elements. Much of Cuningham Group’s initial work with the church was therefore focused on translating these ideas into reality.

Two years after the successful first phase of renovation work, Cuningham Group and St. Katherine collaborated again, this time focused on the construction of a new kitchen and interior courtyard improvements. With the understanding that the church needed to be both a place of worship and a community resource, the design team helped St. Katherine implement industrial full commercial kitchen rivaling many restaurants. The kitchen was then connected to a redesigned internal courtyard that was crafted to look and function like a Greek “streetscape” for various community events, including the annual Greek Festival. By situating the kitchen and courtyard in this way, St. Katherine could better accommodate large groups of people and public events.

The third phase featured improvements to the church’s entrance, offices, worship space, and Hall assembly areas. Located on a tight site with no wiggle room (as is common in the Los Angeles area), every square inch counted. Thus, a big focus of this third phase was finally addressing vertical circulation issues between buildings. In order to help connect the campus naturally without encumbering flow, designers implemented a pedestrian bridge spanning over the recently completed interior courtyard. 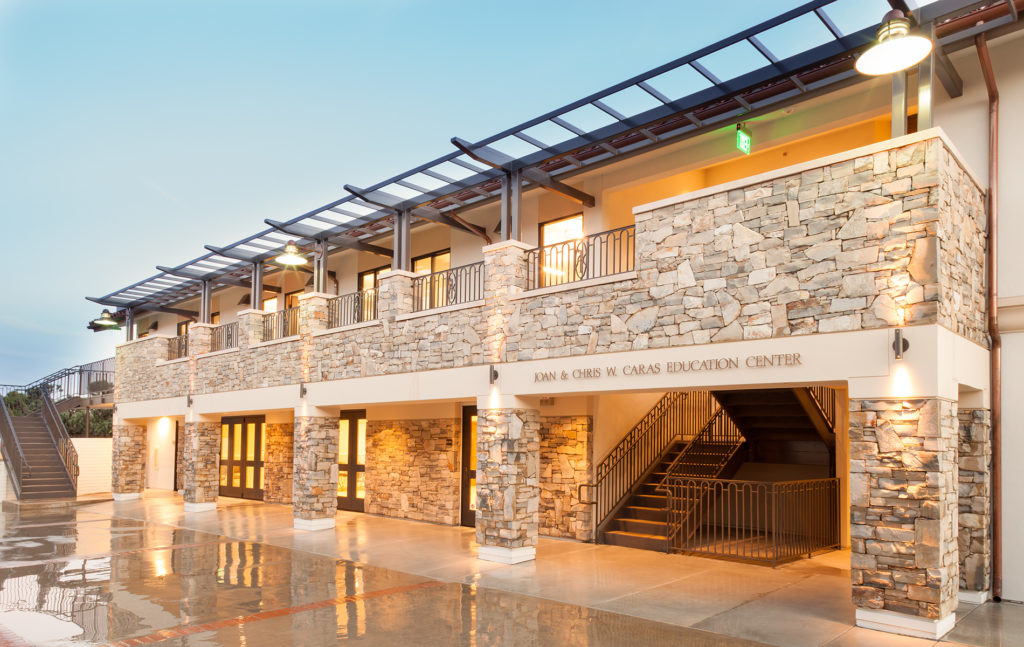 Flexible Collaboration Through Design Options
Because O’Dowd’s early master plan had given the church both a sense of direction for their new facilities and a city entitlement for the site, the function of Cuningham Group’s design team thus became that of a conduit—a means for the church’s steering committee  to process and perfect their distinct vision internally and with the local government. Central to this process was Cuningham Group’s strategic use of Revit design options, which gave designer’s a flexibility when working with the client. As a result, designers produced at least three major design options for each of the project’s three phases.

By continuously incorporating an “imagination cycle” like this into the design process, the members of St. Katherine were able to best realize their original vision within feasible funding constraints. For example, when budgetary concerns during the project’s third phase made the previously-planned domed entryway unfeasible, Cuningham Group’s design team quickly provided St. Katherine with several alternative designs, which were St. Katherine leadership adjusted to embody much of the feel and function of the original space. Although not what was originally intended, the fluid nature of the teams’ collaboration allowed the client’s strong vision to flourish during each step of the process. 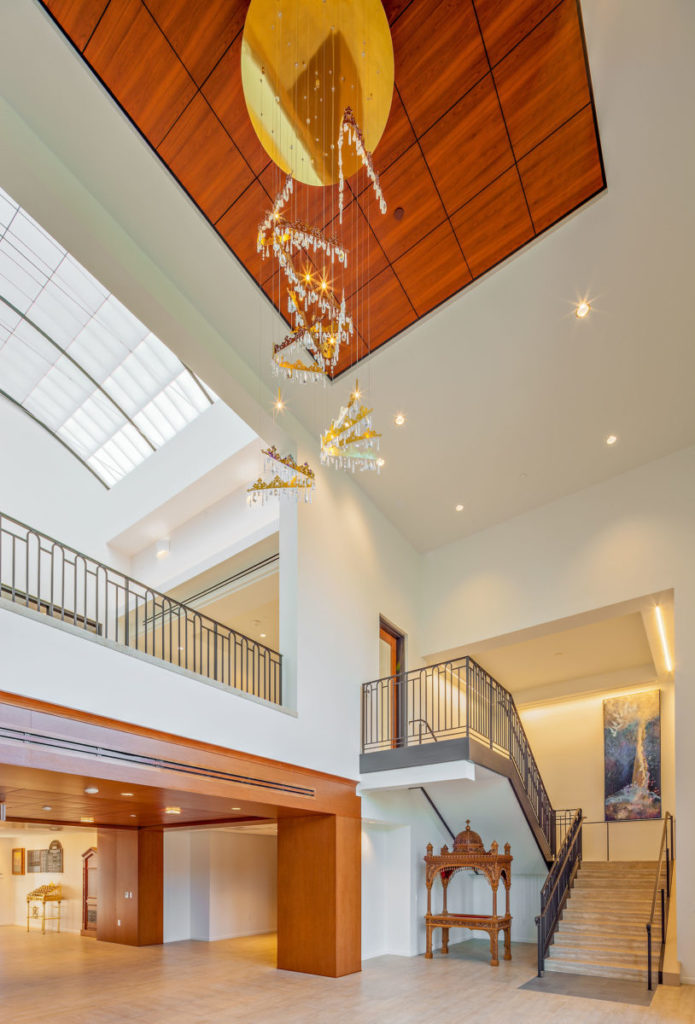 Understanding Traditions
During all three phases, Cuningham Group’s design team enjoyed the extended collaboration with members of St. Katherine community, and grew to know and understand the history of both the local community and the building they were working on. As such, many of the church’s new design elements are rooted in tradition and a sense of place. This is perhaps best exemplified by the new entrance, which retrofits some of St. Katherine’s old stain glass elements to become front and center. North-sky daylighting from the street-side façade and a large overhead translucent barrel vault skylight flood the entrance to create a sense of openness and welcoming during the daytime, and a dramatic neighborhood presence in the evening hours.

This warmth is carried throughout the space through a strategic use of simple and honest building materials. For example, stone quarried locally in California roots the new buildings in a sense of place, while copper roof elements give the exterior a pop without being showy. Additionally, a fountain in the courtyard with mosaic icons fabricated in Italy further reflects the connection between the physical campus and the church’s broader spiritual tradition. Whereas some may have redesigned St. Katherine to be modern and flashy, Cuningham Group’s close client relationship with the church instead resulted a space that feels comfortable, appropriate, and “lived-in.”

As the enthusiastic Greeks say, "OPA!" 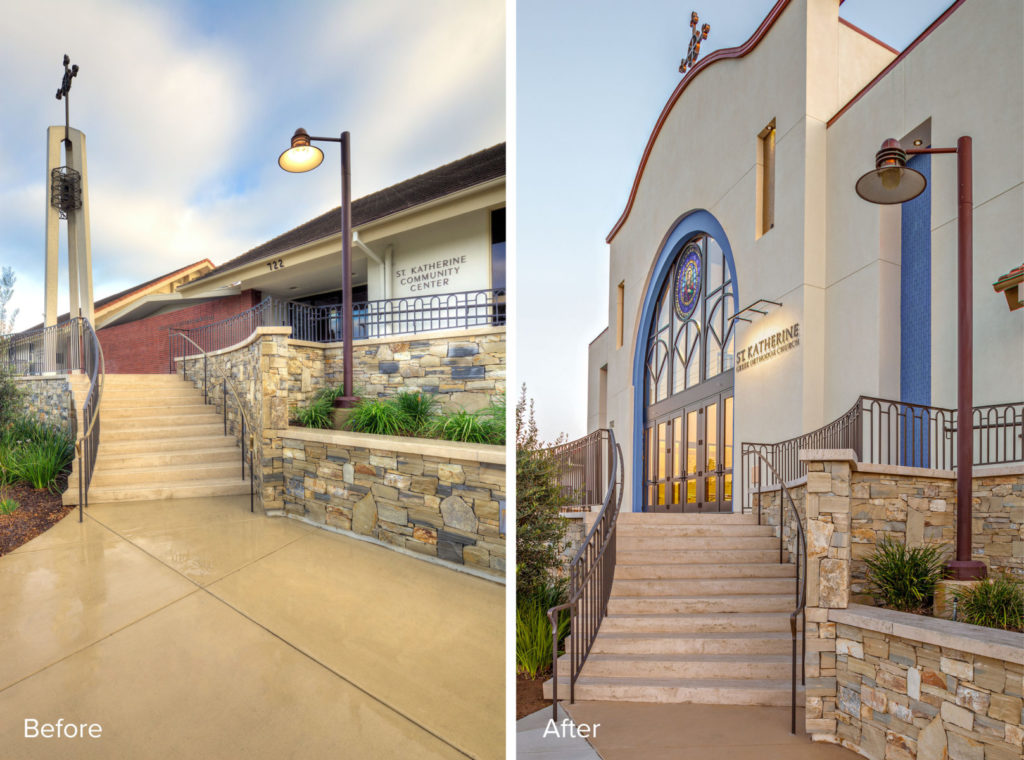