A Message Just for You: Forced Perspective as a Wayfinding Tool 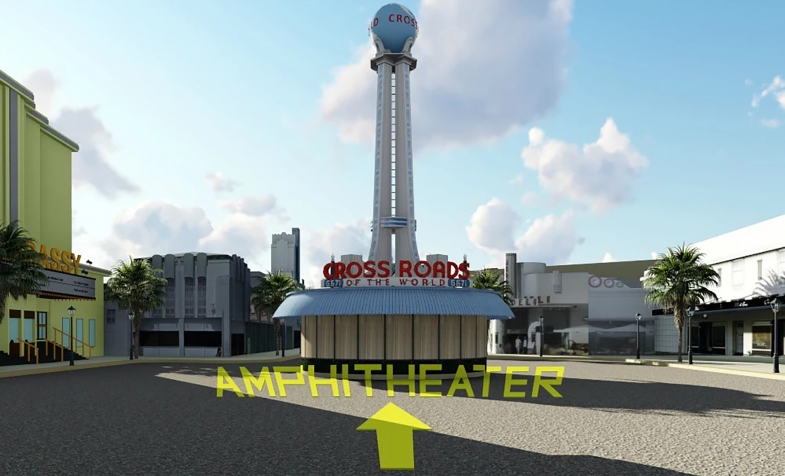 A Message Just for You: Forced Perspective as a Wayfinding Tool

A traveler is walking through an airport, in a crowd of people all bound for different destinations. She wonders which way she should walk to get to gate B33. Suddenly, she receives a message intended only for her, directing her to turn left at the next intersection — a message none of the hundreds of other people around her can understand.

What I’ve described is not augmented reality, nor is it some new, wearable technology. In fact, it’s not new at all. The concept I’m speaking of is forced perspective, an optical illusion wherein an object or image is only fully visible from a specific vantage point.

Forced perspective has been utilized in art and architecture for hundreds of years, dating back to the Renaissance. Examples of forced perspective range from Melozzo da Forlì’s 1474 ceiling frescoes, which are convincingly three-dimensional only when viewed from one specific spot in Rome’s Basilica dei Santi Apostoli, to the 2014 music video for O.K. Go’s The Writing’s On The Wall, in which clever camera angles are used to show hidden messages that complement the song. The common thread here is the targeted nature of the effect; an individual standing in the right place will be amazed by what they see, but no one else around them will share their experience.

Forced Perspective as a Wayfinding Tool
While the basic concept of forced perspective has been around for hundreds of years, using it as wayfinding tool is relatively new. Forced perspective wayfinding (FPW) aids are designed to send messages that help people quickly and efficiently find their way through an unfamiliar environment. One of the few real-world examples of FPW is the Eureka Tower Car Park in Melbourne, Australia, completed in 2006.

Despite its rarity, FPW can offer many benefits over traditional wayfinding signage. The main reason being inherent to its nature: since FPW aids are only legible for their intended users, the possibility of confusion during wayfinding is reduced. For example, if people walking through the front door of a conference center should know the way to the main auditorium, then FPW could be used to offer specific directions only to those entering through that particular door.

A second argument for FPW is increased size. FPW utilizes existing surfaces as its medium (e.g., streets, buildings, rock formations, etc.). As such, it can be very large. Increased size makes the message more noticeable and easier to read from a distance. Additionally, FPW can be applied to a surface in a variety of ways, both permanently and temporarily. Painting FPW onto a surface is an effective option for long-term needs, while displaying a message using projection mapping technology is great for on-demand or temporary needs. This also has the potential to decrease costs of signage because the cost of application, maintenance, and removal are greatly reduced or eliminated.

Testing the Benefits of Forced Perspective Wayfinding
A few years back, I decided to delve into the applications and effectiveness of FPW. In theory, the benefits of FPW were obvious, but I wanted to assess the use of this unique tool. To test my hypothesis that FPW would allow users to navigate through space more quickly and effectively, I created virtual environments in Lumion, a real-time architectural rendering software. Each of the virtual environments had two versions, one with forced perspective wayfinding aids and one with traditional signage (the control treatment). Some images of these environments are shown below. 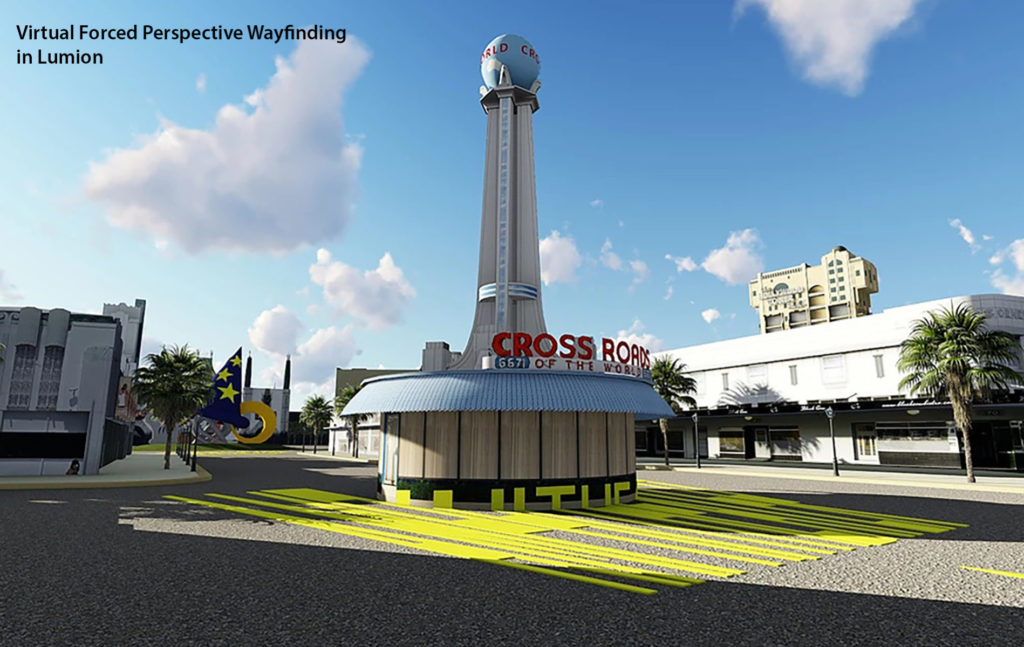 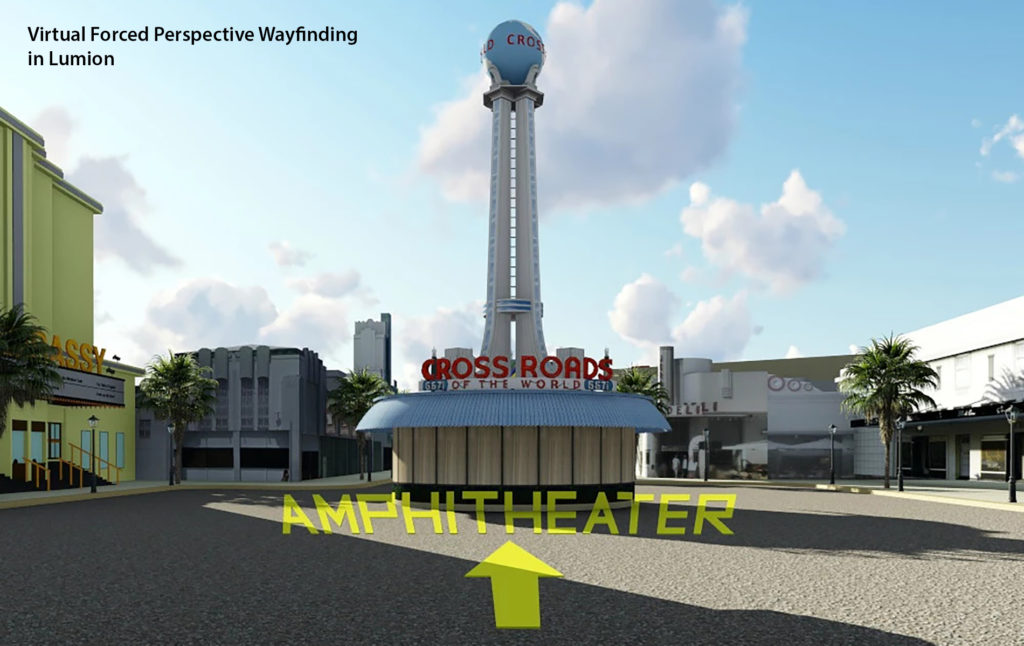 The Results
Twelve participants took part in my study, using a joystick to navigate through the virtual environments as quickly as possible. Test subjects were timed, and upon analyzing the data, there was indeed a significant difference. Those with access to FPW were significantly quicker at making their way to a location than their counterparts who had to rely on ordinary signage.

The results were promising, but a follow-up study with more participants would certainly help validate the results of my initial efforts. There are also infinite nuances of FPW that could be explored in order to determine how to best improve its efficacy; topics of study could include the color, size, and positioning of FPW and the impact of such factors on wayfinding behavior. Forced perspective as a wayfinding tool is still in its infancy, and there are many new and exciting directions it could take.

Moving Forward
For designers like us who strive to help people find their way through airports, public parks, shopping malls, and other unfamiliar environments, FPW is a tool that merits further research and investigation. Forced perspective may be centuries old, but I believe it still has a bright future ahead in our designed world.

Who knows? Maybe one day you’ll be running to catch your flight, when a special message intended just for you will appear, letting you know exactly which way to go. 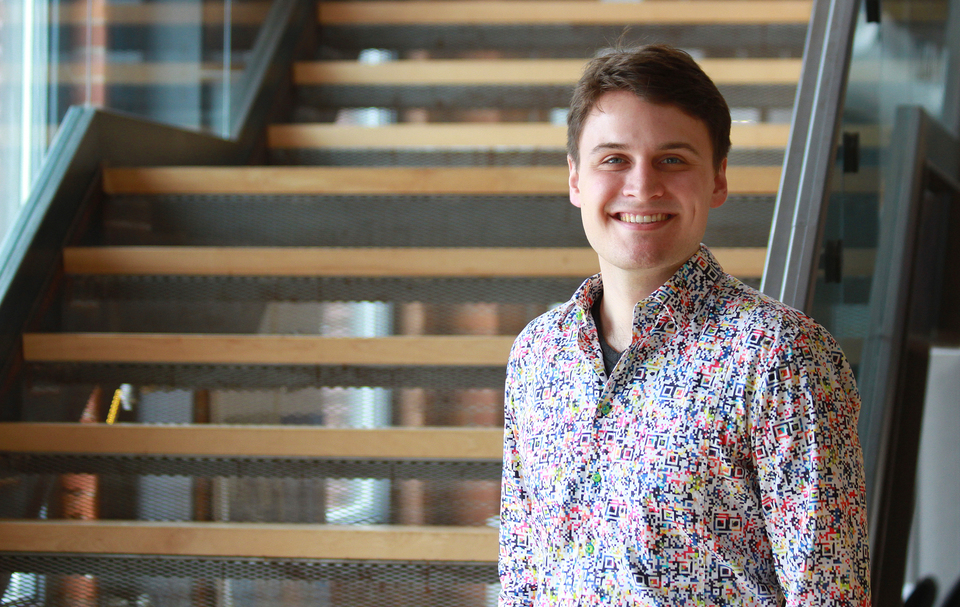