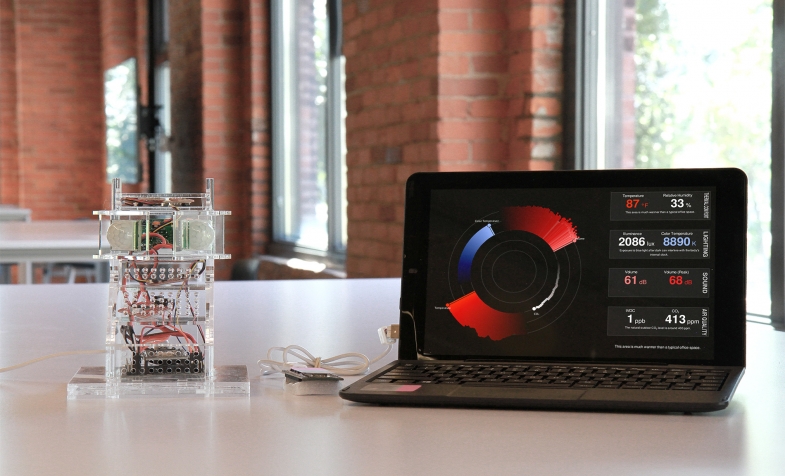 How can sensor data directly inform the experience of everyday building occupants?

How can sensor data directly inform the experience of everyday building occupants? The last three decades have seen a proliferation of sensors and network connectivity in objects ranging from the everyday to the one-of-a-kind. This rapidly increasing digital neural network, often referred to as  the “Internet of Things” (IoT), is poised to completely restructure the way we live our daily lives. The implications of this growing technology is nothing short of a new industrial revolution.

Naturally, architecture firms have begun investigating what the implications of the IoT will be in the built environment. The most common application in the built environment is for control systems, collecting spatial data and responding to this information. Another area of the built environment in which the IoT can be applied is for Post Occupancy Evaluation (POE). Recently, Cuningham Principal Adam Wilbrecht partnered with Master of Science in Research Practices student Chris Savage to approach this topic from a different direction, creating the Room Fitness Monitor, a device that makes sensor data accessible and helps room occupants better understand their local environment.

Working Toward Healthy Spaces
The Room Fitness Monitor is analogous to a fitness tracker, but applied to the built environment at the scale of a room. Just like personal fitness tracking devices, the metrics tracked and reported are those which have an impact on human health, productivity and wellness. The sensors chosen for use in the prototype array measure temperature, humidity, light intensity, light frequency, sound intensity, and air quality.

Similar to how most people have a basic understanding of their fitness, people generally have a qualitative understanding of how they sense and feel a room’s environment. For example, the occupant will recognize if a room is too loud or stuffy. The Room Fitness Monitor is meant to compliment this reasoning process and affirm an occupant’s perception. Additionally, the device collects historical data to bring attention to persistent low-grade problems within a space that are less evident, and can provide users with actionable data for taking ownership of their environment.

A Powerful User Interface Design
Central to the design of the Room Fitness Monitor was its user interface. The device’s unique display format separates it from similar IoT monitors in that it not only shows data, but helps the user interpret this data by providing health-based recommendations. Primary considerations in the user interface development included the following:

1. Accuracy
2. Qualitative impressions
3. Understanding qualities over time (histogram)
4. Give occupants prompts to direct action based on a space’s characteristics

The display strategy has two primary components, concentric circles defining magnitude with rotating histograms representing data over time, and a set of metrics describing the quantitative state of the space at the current time. This detailed information is coupled with prompts that warn an occupant about potential health risks and suggest potential health-positive behaviors. 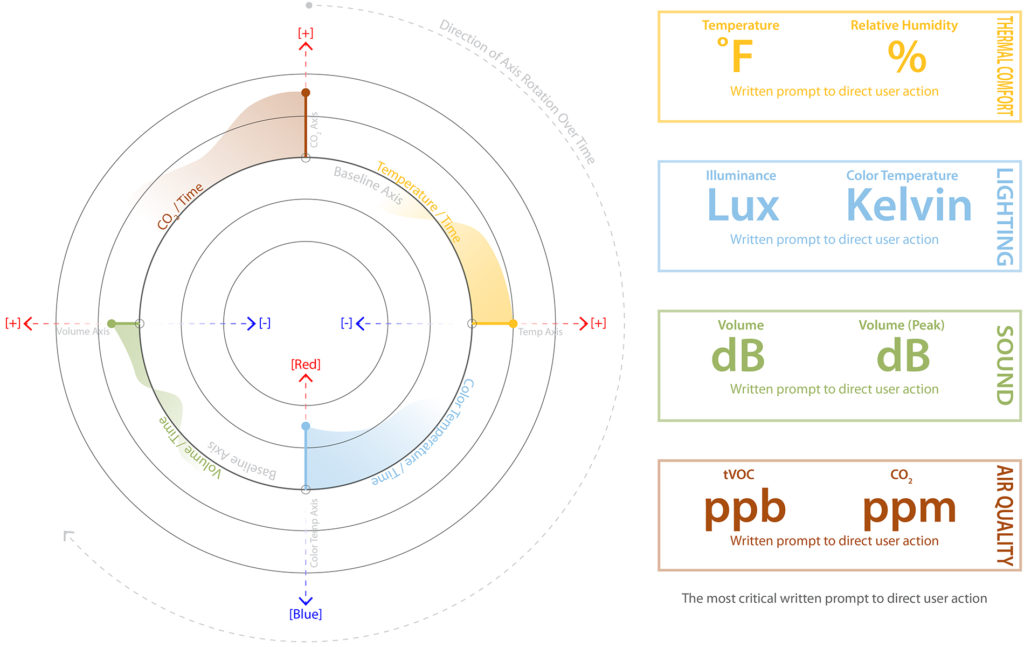 One of the key strengths of this display is its ability to communicate multiple variables over time and their relation to one another in a manner that is easily understood through blue and red color coding.

Another key strength is the introduction of prompts to the raw data. These written prompts allow users to understand the impact of sometimes esoteric data and can encourage them to take initiative and action to improve their immediate environment. For example, color temperature affects circadian rhythms. Blue light (higher temperature) can increase productivity during the day, but at night, may negatively affect an occupant's ability to fall asleep. By notifying a space's occupants of the level of blue light and its effects, the Room Fitness Monitor can help improve an individual's sleep cycle. In another circumstance, it may detect that an excessively loud work environment exceeds OSHA safety standards. By alerting the occupant of the potentially dangerous condition, the Room Fitness Monitor can help prevent hearing damage and secure the individual's wellbeing.

Similar recommendations are given according to temperature, relative humidity, illuminance, volume, CO2 and tVOCs. Theses recommendations are based on standards by ANSI/ASHRAE Standard 55 and 62.11, WELL, IES The Lighting Handbook 10th Edition, OSHA, NIOSH, CDC, EPA and WHO.

Data Collection Examples
As the prototypes were developed, spaces inside the firm’s offices were used to test and calibrate the Room Fitness Monitors. The following are screenshots taken directly from the devices’ displays as they collected data. These screenshots demonstrate how a space’s data tells a story complimentary to its immediately-observable characteristics. 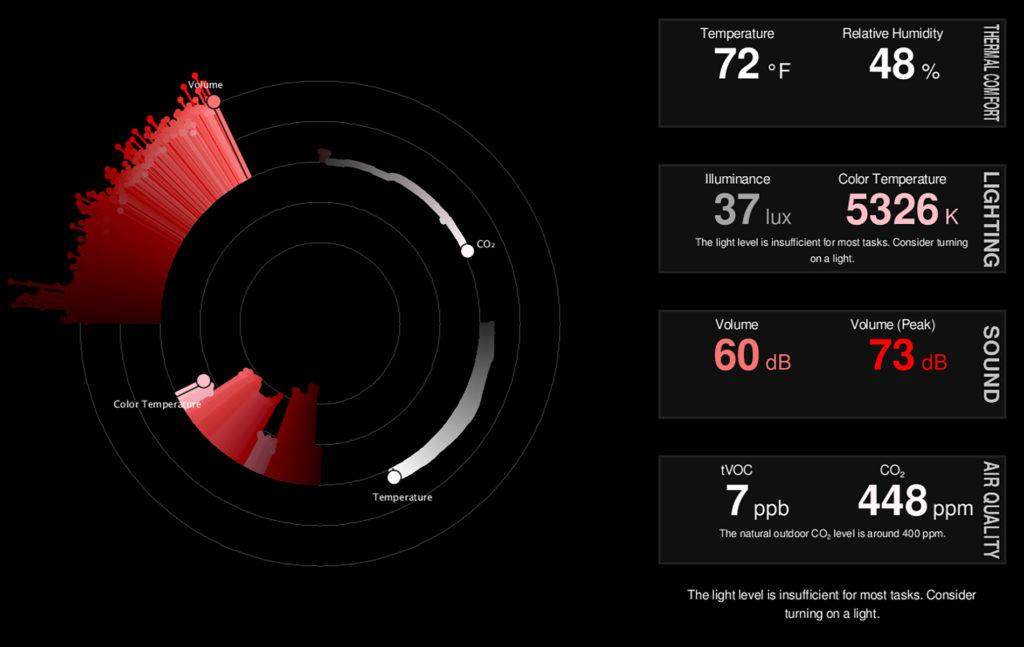 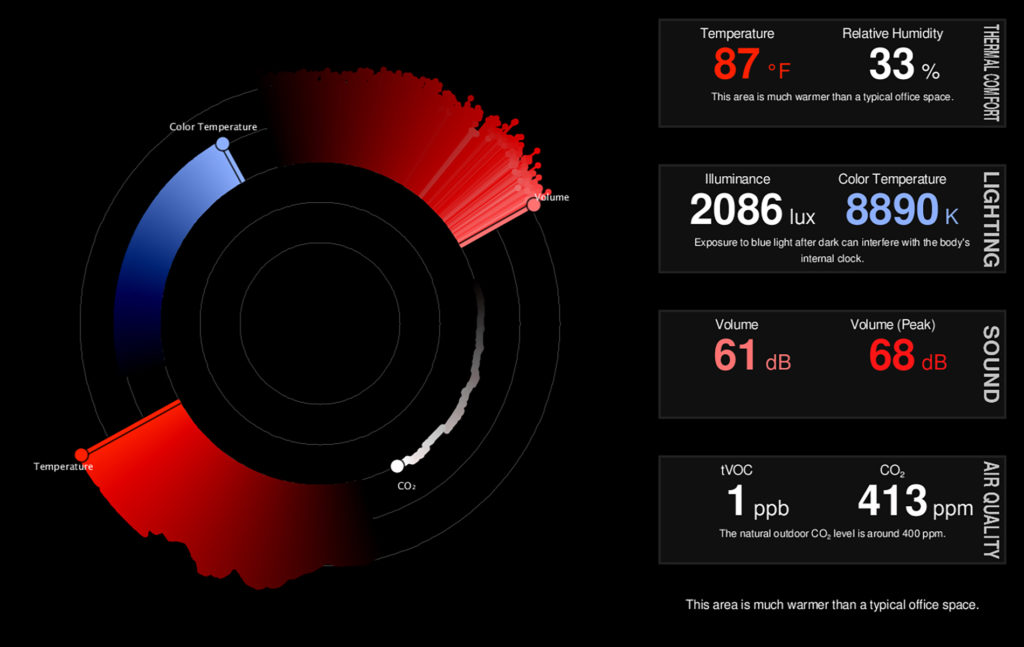 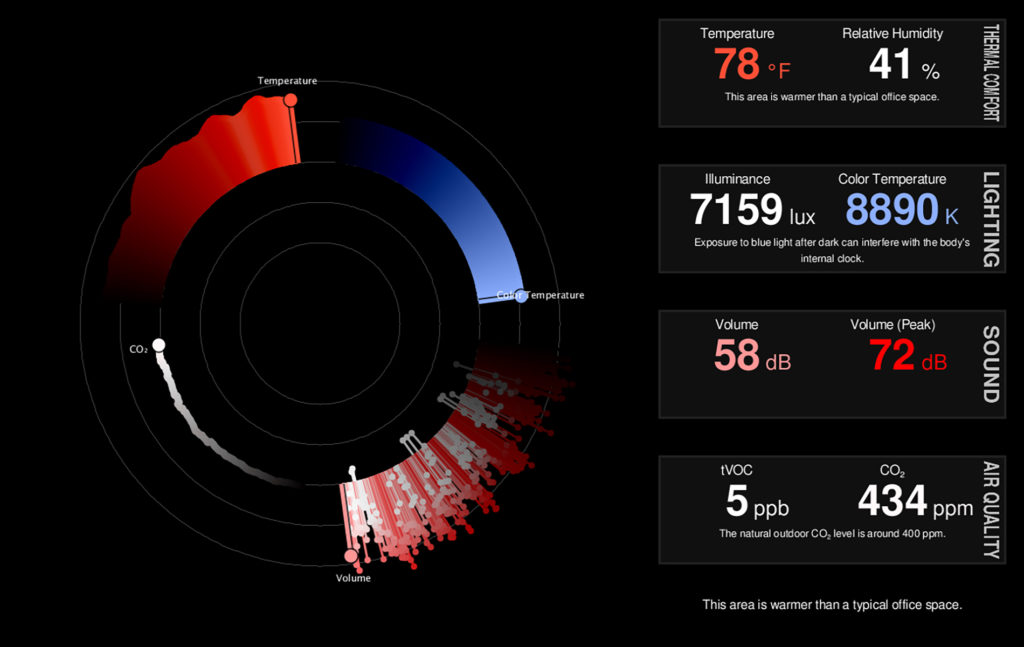 The sensor array has been through two prototype iterations, and the user interface has gone through dozens. The prototype has now reached a point of promise to move into actual product development.