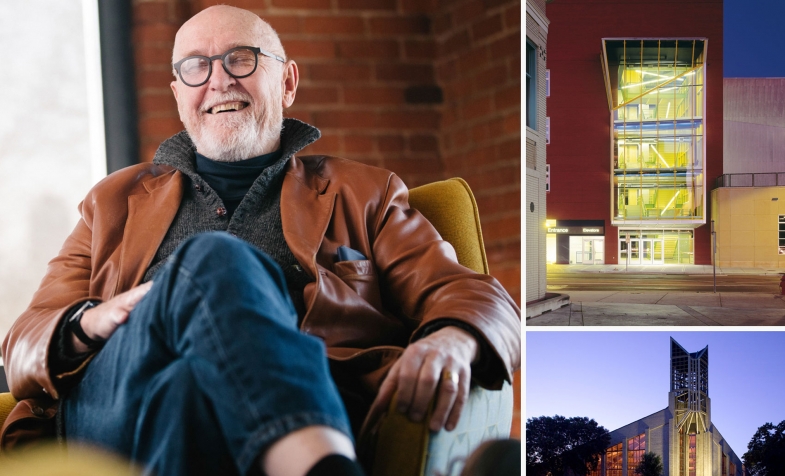 The jury evaluated Gold Medal candidates (individuals nominated by their peers) on the depth and breadth of their contributions and their cumulative impact on the profession of architecture in Minnesota. They also examined how candidates’ contributions and mentorships have advanced the future of the profession while honoring its traditions; the degree to which candidates have transcended or united specific areas of expertise; are widely known for the quality of their work; and have demonstrated exemplary character.

John has long been a champion of innovative, sustainable, people-driven design that puts the end user at the center of his projects. He has earned multiple design awards from AIA Minnesota, and his firm’s work has received more than 250 honors from various design and industry organizations. Notable among his many AIA Minnesota award recognitions is receiving five 25 Year Awards, which recognize projects that stand the test of time.

John’s work originated in residential design, and over the years expanded to encompass, corporate, hospitality, entertainment, multi-family, worship projects, and more. John is considered a visionary in education design, helping to develop the “Consensus Planning Approach” that merged curriculum and school design for maximum effectiveness. Schools that John has worked with teams to design, including the nationally-recognized Alexandria Area High School, are recognized for reflecting their communities and creating successful learning environments, while also achieving sustainability and revitalization goals.

Cuningham Group Architecture, which he founded in 1968, was honored with the AIA Minnesota Firm Award in 2013. Today, Cuningham Group has more than 300 employees in six U.S. cities and two international locations.

Jurors noted the “diaspora” of notable architects and firm principals who got their start at Cuningham Group, and several of those industry leaders wrote letters of support, describing how much they learned from working with John and how he empowered them to reach their full potential. One letter stated, “John’s infectious energy, his commitment to making an impact on the world around him, his mentoring of young architects and his idealism are all inspiring as a model for any architect.”

Both jurors and authors of letters of support noted that John Cuningham “walks the talk” of commitment to equity and diversity in the profession. Throughout his career, he has championed the work of women and architects of color, and devoted time and resources to programs that bring students hands-on opportunities to explore the profession of architecture. One letter of support noted that John is “remarkably empathetic to the points of view of underrepresented groups and insightful about his role in the majority.”

John is committed to creating and supporting a strong sense of firm culture and community, leading efforts such as an annual art show that raises funds for a different local nonprofit organization each year, and the Urban Current series, which creates engagement in civic ideas and cultural dialogue. Letters of support noted how John’s mentorship style is grounded in a sense that each individual can contribute and his commitment to embracing new ways of thinking.

The jury was also impressed by John’s dedication to advancing the future of the profession. John served as an Associate Professor at the University of Minnesota School of Architecture for 17 years and as a guest lecturer at the Minneapolis College of Art and Design. He has developed a firm culture that supports active engagement of employees in AIA at the local, state, and national levels. In his design work, his firm leadership, and his mentoring of other professionals, John embodies all the values that the AIA Minnesota Gold Medal celebrates.

John will receive his Gold Medal Award at the annual AIA Minnesota Awards Celebration on December 7 at the McNamara Alumni Center in Minneapolis.

The American Institute of Architects Minnesota, founded in 1892, is dedicated to strengthening our communities, improving our built environment and providing exceptional design. For more information on the organization and Minnesota architectural firms, reference our  website, visit our  Facebook  page and pick up a copy of  Architecture MN, our award-winning magazine.