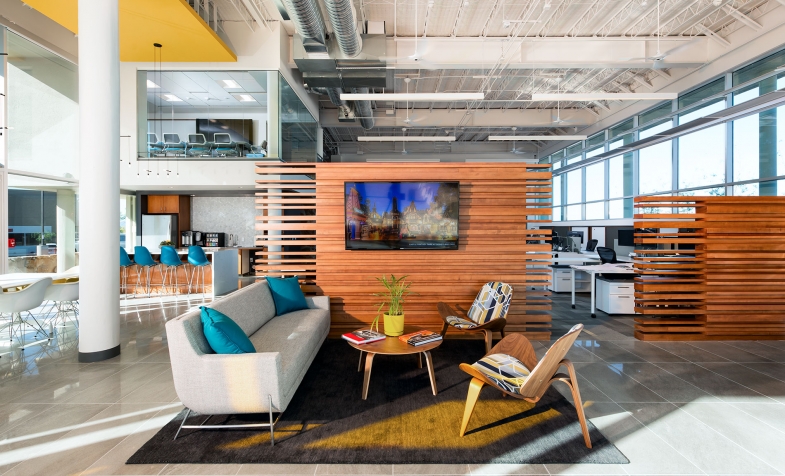 At our Open House in Phoenix on April 6th, we were excited to celebrate not only the growth of our local office, but the beautiful transformation of the historic midcentury modern Farmers & Stockmens Bank Building. 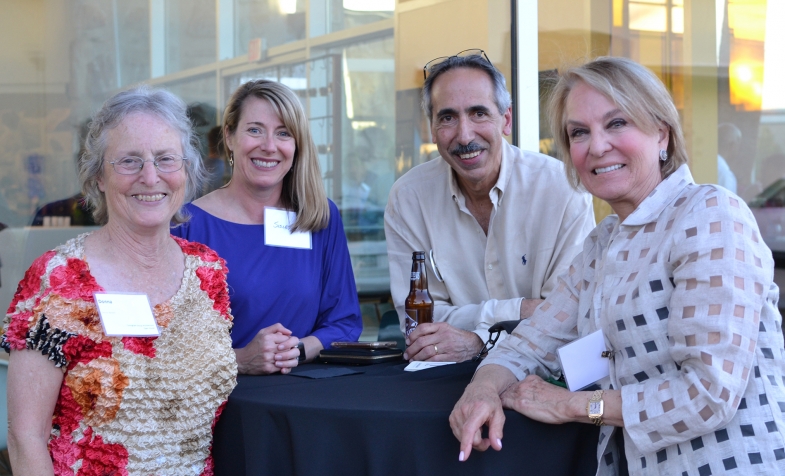 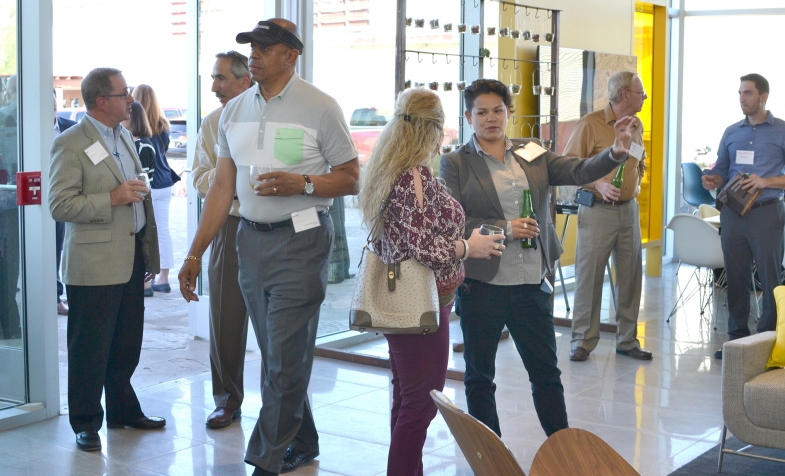 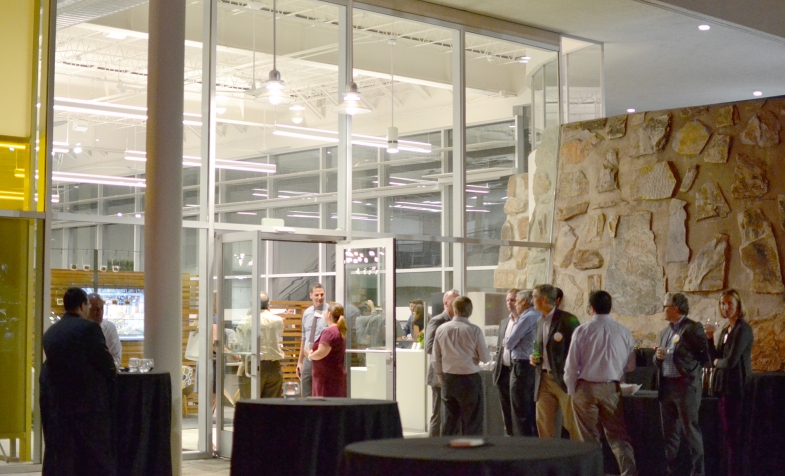 William Pereira
Originally designed by acclaimed American architect William Pereira in 1951, the bank building’s original layout proved ideal for its new purposes, not only to house architects, but to inspire them.

Based in Los Angeles, Pereira is known for his love of science fiction. His landmark designs are prolific and include the Transamerica Pyramid in San Francisco, the Geisel Library in San Diego, and the Theme Building at Los Angeles International Airport, each of which exemplifies a futuristic architecture envisioned in the fifties and sixties. 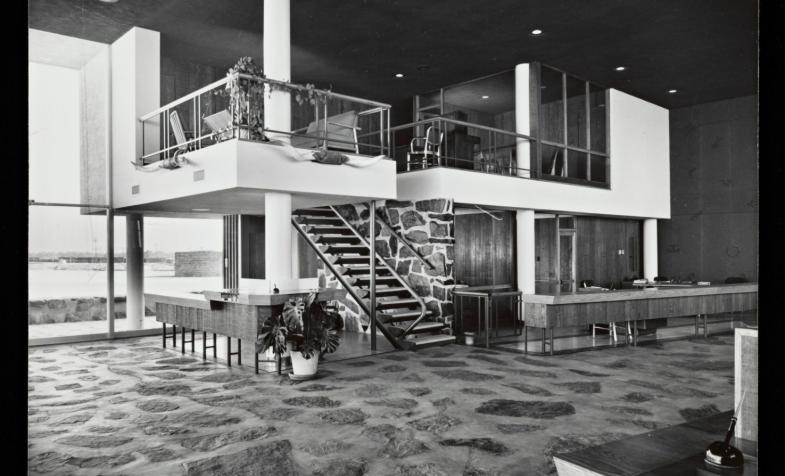 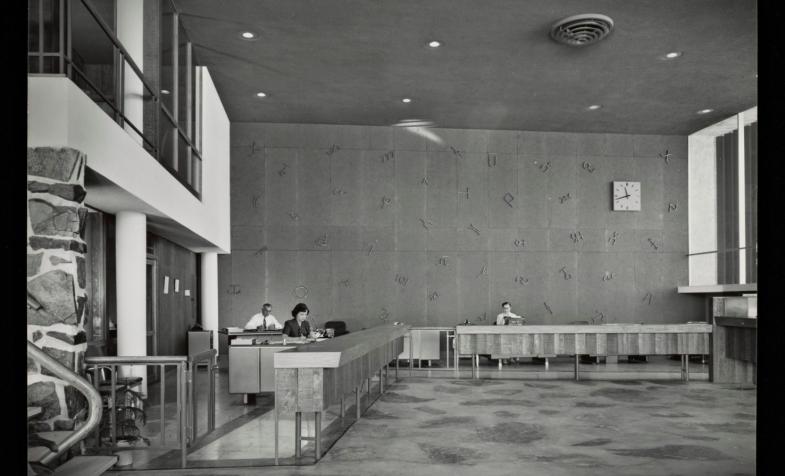 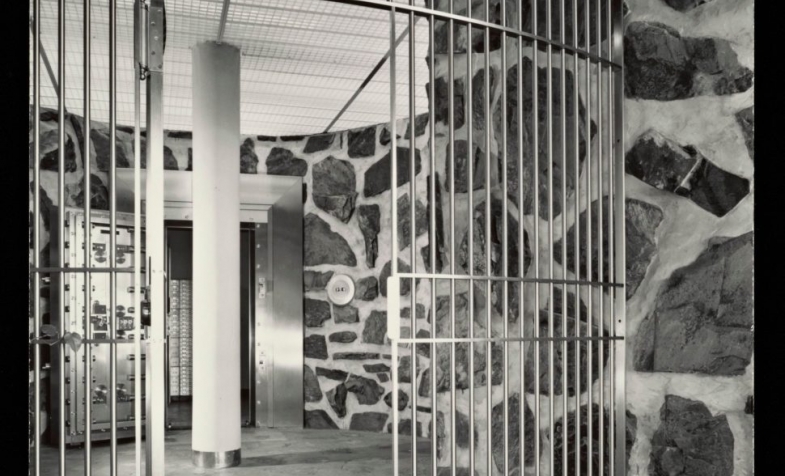 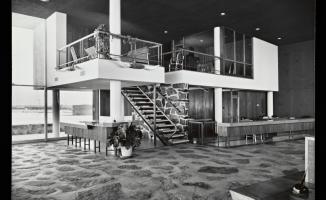 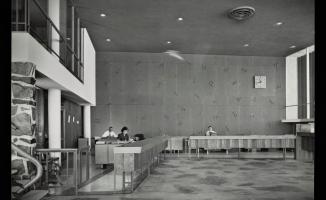 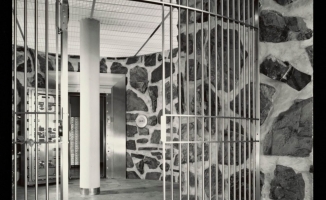 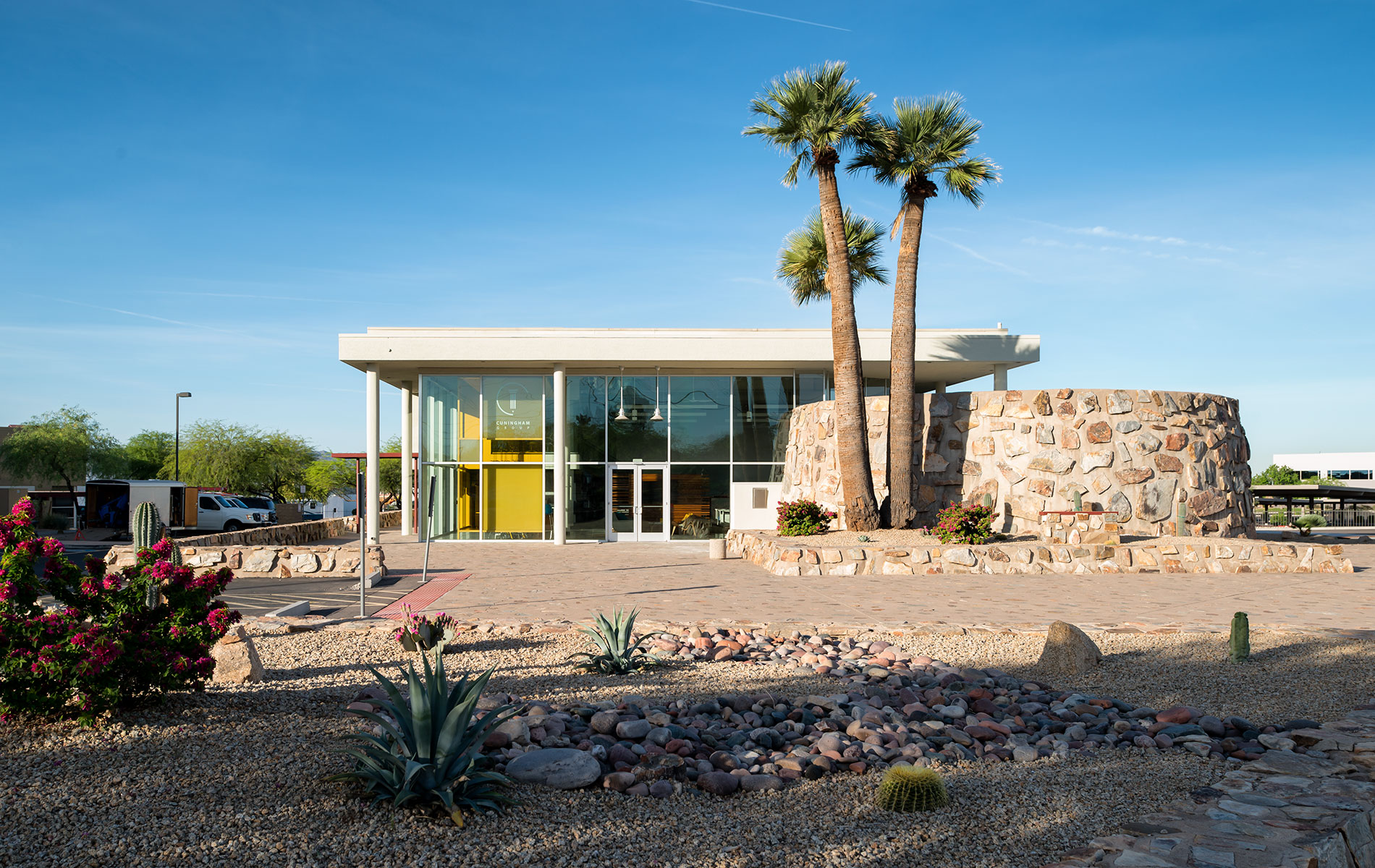 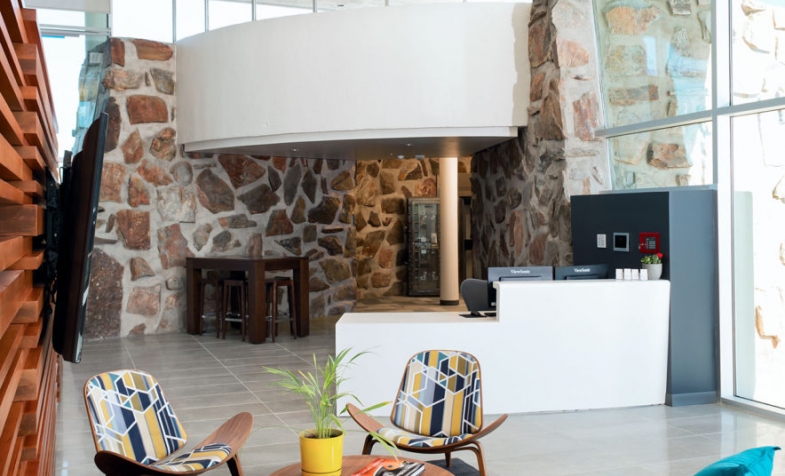 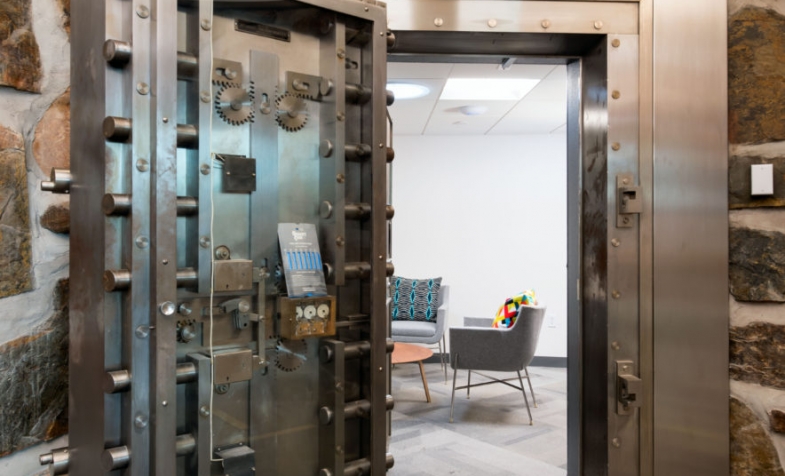 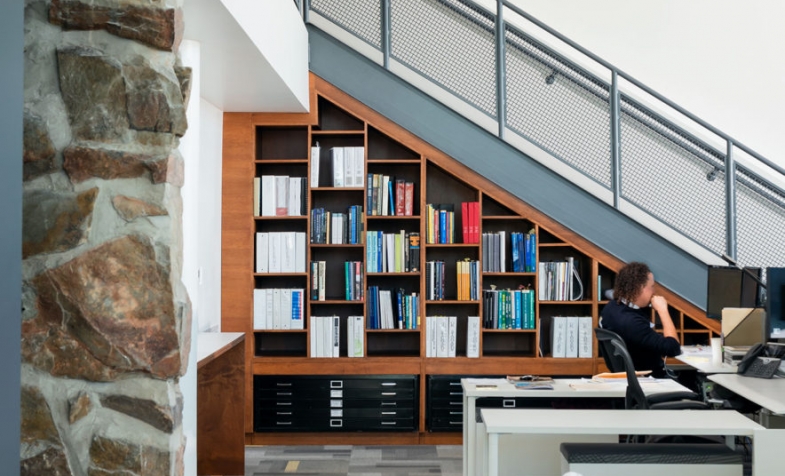 The original design effectively blends modern architecture with regional influences, leveraging natural daylight with its floor-to-ceiling aluminum and glass curtain walls. Calling to mind a kiva, a room utilized by Native Americans for ceremonies, which were often round with upward-sloping walls, the circular bank vault is built from large desert stones set irregularly into wide concrete mortar joints. This material is carried throughout the building’s interior and exterior accent walls. The blending of both modern and international architecture was unique and influenced the designs of other banks in the region. Unfortunately, poorly-designed alterations were made to the building throughout the years, diminishing the original design’s integrity. Stucco panels had replaced several of the glass panels in the front of the building and large portions of the original stone flooring were removed.

Restoring The Historic Space
Jokake Companies was awarded a grant in 2013 to restore the building to the original 1950’s design. In 2014, the site was added to the Phoenix Historic Property Register.

In 2016, we leased the historic landmark for our Phoenix location. The modern aesthetic translates beautifully to a contemporary design for creative architects. It avoids visual barriers, maximizes collaboration, and allows a variety of meeting spaces, including video conference rooms, and a welcoming kitchen and island. The open collaborative work space is organized into efficient rows of variable-height workstations, which are interspersed with printers, layout tables, and materials libraries. 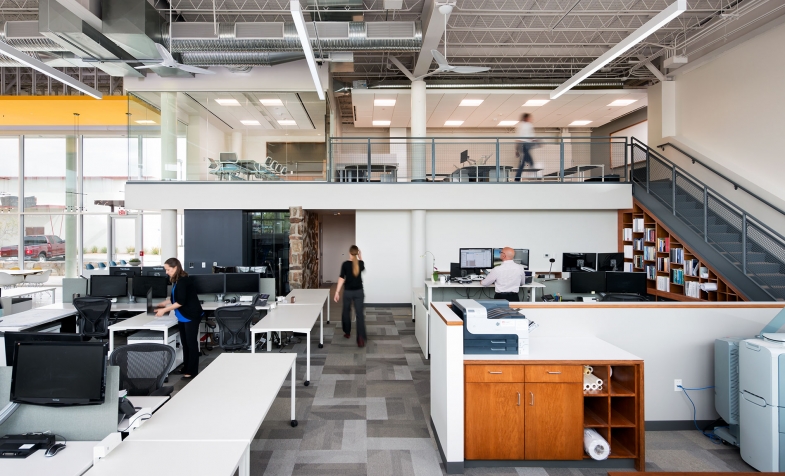 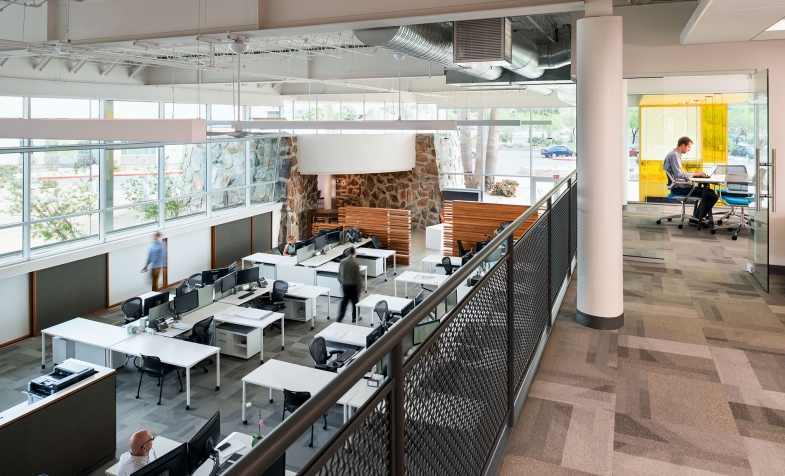 The restoration returned the full-height glass panels to their original design. The stunning mezzanine, which overlooks the original two-story bank lobby, now features a clean, glass-surround video conference room. It boasts extraordinary views down to the main space and out to the surrounding desert landscape.

We also upgraded the 1951 building to meet current sustainable standards and expectations. Interior horizontal solar-control devices were added, bouncing sunlight up to the ceiling to push natural light deep into the interior space. Tubular daylight devices were installed in the vault to provide natural daylight to an otherwise artificially-lit space. Employees are able to access tunable lights creating a more productive work environment by maintaining the circadian rhythm of employees. Motorized shades block harsh sun in early morning and late afternoon. Adjustable light shelves bounce light to the ceiling to create a better day-lit space and to cut off direct sun. Fans support air distribution and circulation, and energy monitoring records and displays sub-meter energy use. 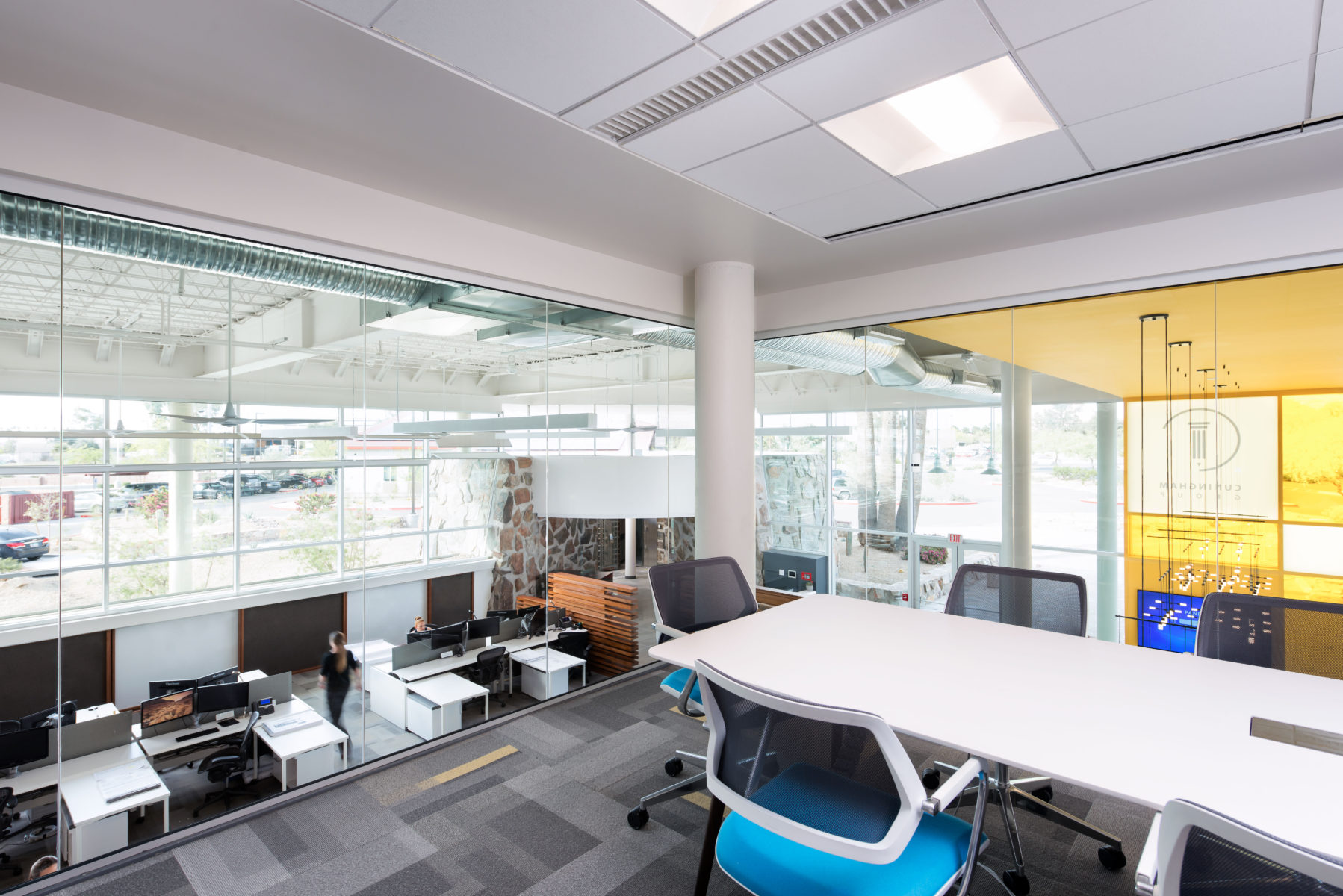 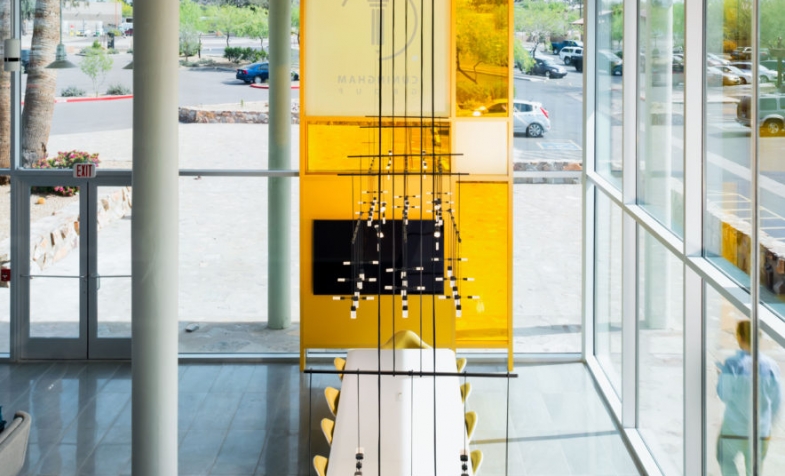 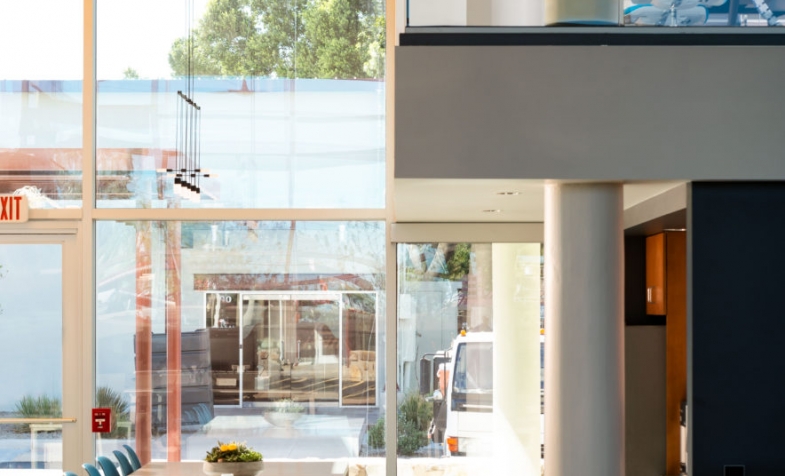 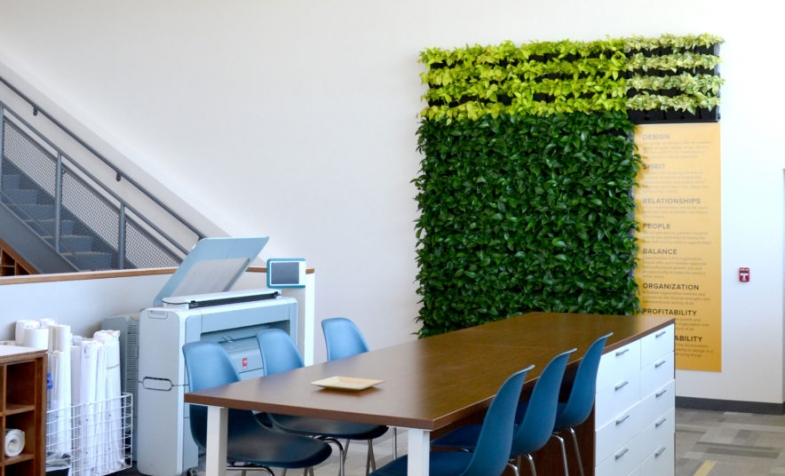 The most dynamic addition is the living green wall. By providing a connection to nature without taking coveted floor space, employee health and workplace satisfaction is enhanced. Stress is also reduced through biophilia and air quality is improved while noise levels are reduced.

We treaded lightly with the tenant improvements in order to let the building’s history be appreciated; everything is open to the one main space. The kitchen-social area bleeds into the large main-floor collaboration zone and supports spontaneous meetings, teamwork, and mentorship. The vault has been repurposed and transformed into a curved video conference room with a bespoke curved conference table in yellow. The entrance to the vault includes the original multi-ton stainless steel door with clock-work locks and timers still is in place and functional. Original stone walls have been preserved throughout the building contrasting with the elegant lines of the new design while serving as a reminder to the building’s past.

Furnishings and materials selections are integrated into the updated midcentury architecture. Cinnamon-toned natural wood reflect in the large-format grey porcelain tile lobby floors; bright white walls and ceilings contrast against light and dark grey accents. Pops of bright yellow are highlighted in pillows and in the dramatic “Mondrian” logo wall at the front door. 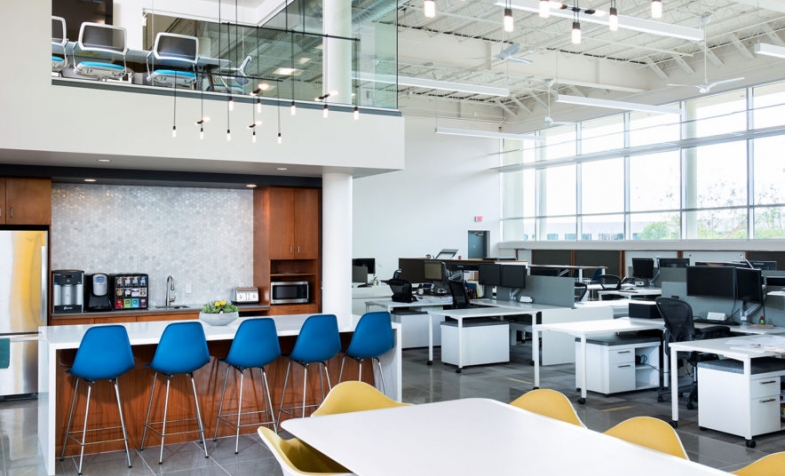 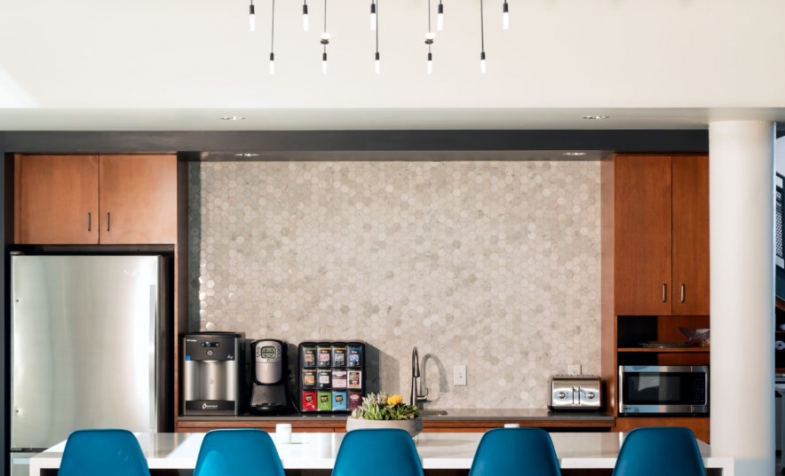