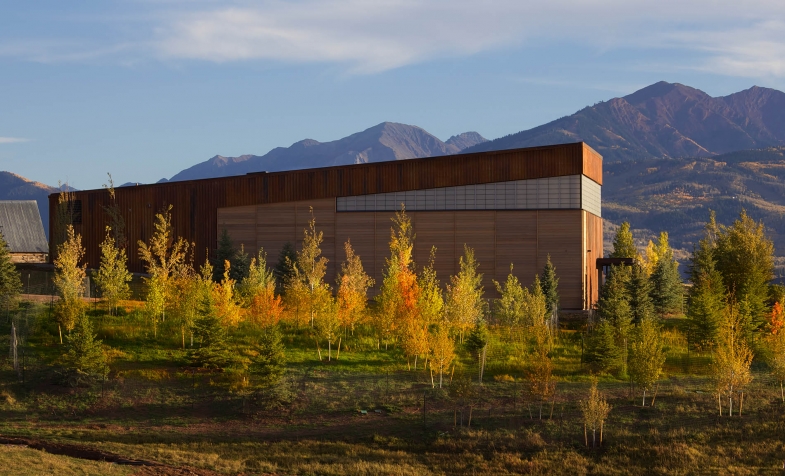 The Aspen Community School is a featured school in the Aspen Sojourner highlighting innovative institutions. Below is an excerpt from the article. The full article is available here. 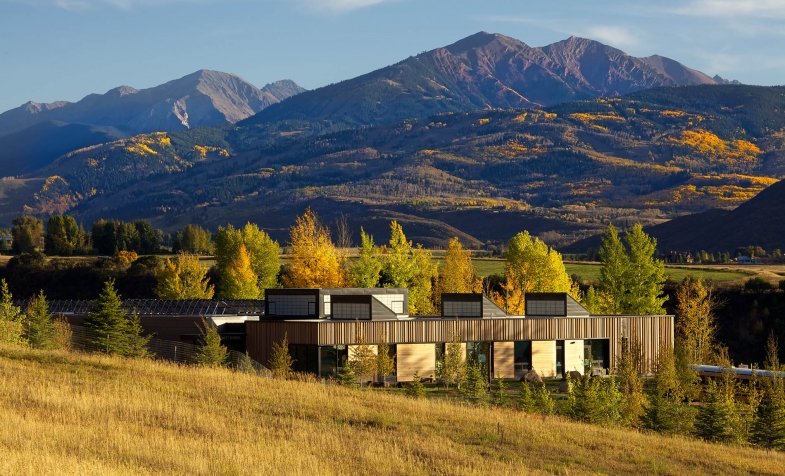 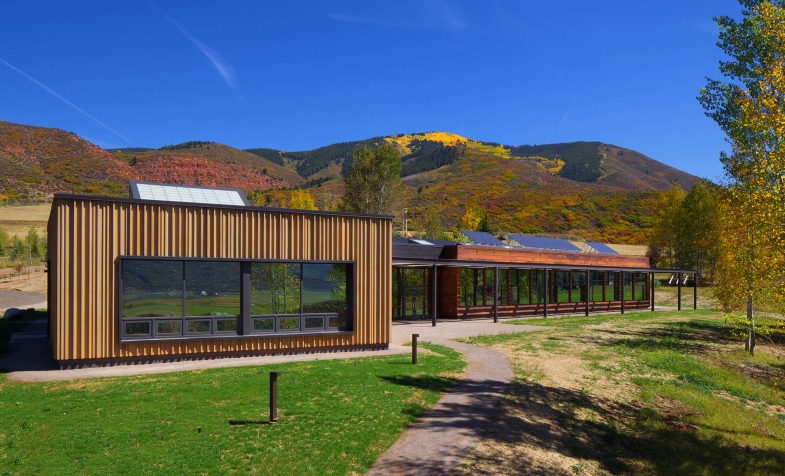 RECREATING AND ENHANCING A SENSE OF COMMUNITY

The Aspen Community School’s 25-acre campus sprawls across a high, dry mesa in rural Woody Creek, amidst an ever-changing spectacle of light and energy in the surrounding landscape. The original school building—a funky log structure that oozed rusticity—was designed by local architect Harry Teague in 1973 as his Yale master’s thesis in architecture.

But, more recently, new buildings were imperative to ACS’s survival, says Skye Skinner, executive director of Compass, the school’s governing body, who oversees the project’s $13.1 million fundraising campaign. “We had a 42-year-old building that was built for a much smaller population and not up to any current building standards,” she notes. “It was a beloved place to work and learn, but we outgrew it.”

Coincidentally, at the time ACS was applying for a Colorado BEST grant (established in 2008 to fund school construction and renovation) to update the existing building, the Colorado Department of Education launched an assessment that concluded that even though the school was in the top percentile of academic performance in the state, it fell into the bottom 1 percent of all public school facilities. Recalls Skinner, “We were on the brink of potentially having to shut down.”

Hoping to salvage the existing buildings, the school looked at ways to reuse what was there. “This was hallowed ground for all of us,” says Skinner. “One of the reasons we waited longer than we probably should have to make a change was that we were afraid of what we might lose. It was not a simple thing to translate what we had into what we wanted.”

Ultimately deeming the original building too far beyond repair, the school embarked on a complete redesign of the campus, engaging parents, students, teachers, alumni, neighbors, and community members in a process that Compass board member Jeffie Butler says was essential to the project’s success. “There was a lot of emotion tied to the physical space of the old campus,” she says, adding that people came out of the woodwork to wax nostalgic and postulate that it would be impossible to recreate the ethos and vibe of the Community School in a new building.

Moreover, it wasn’t enough to have light-filled spaces, big views, and sustainable materials, though all of those are now part of the new school, which opened in September 2015. Throughout the design process, notes ACS principal Jim Gilchrist, certain intangibles were paramount, including the need to create a place where students and staff felt safe and included. “We wanted a place that was going to be a part of how we teach about community,” he explains. “How we treat each other is as important as what we learn. When you look at all of these spaces, they reflect the culmination of thousands of hours and millions of sticky notes about creating that type of environment.” 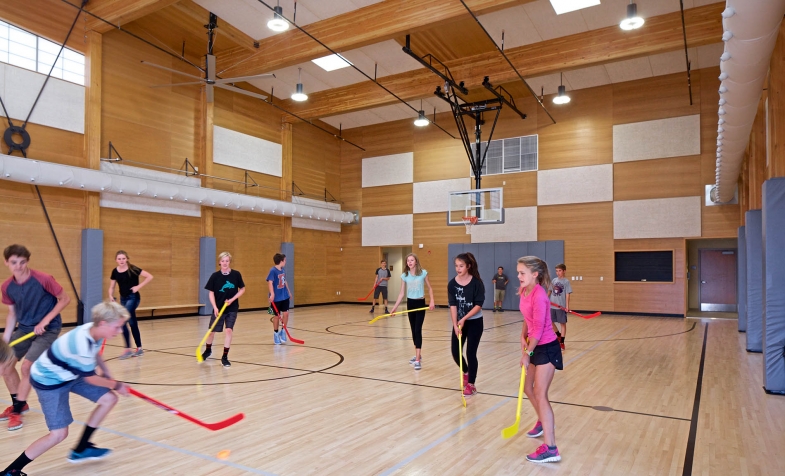 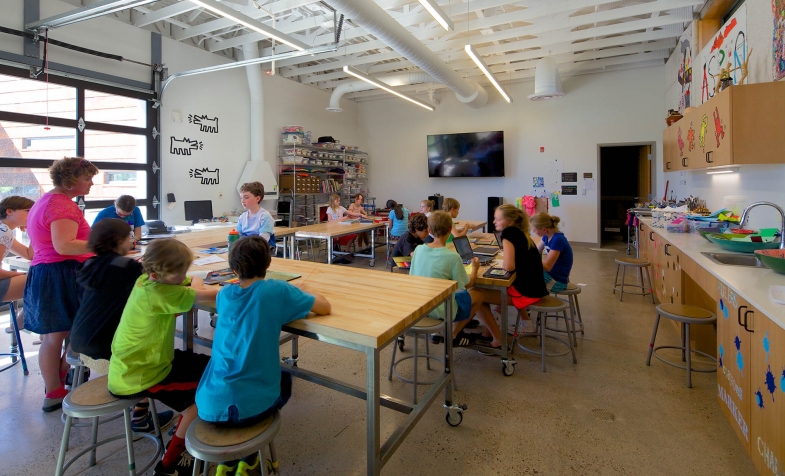 An important aspect of this environment was recreating the heart of the school from the original structure—an open central area bordered by tiered seating where the weekly all-school meetings were held. That heart is now manifest in a large circular gathering space from which emanate, like spokes on a wheel, the classrooms and administrative facilities. It’s a place where the entire school passes through as well as meets to share, problem-solve, and learn from one another. “It’s like a village green, where there is constant interaction and greeting,” says Gilchrist. “It’s also a place where people are expected to rise to their higher community self.”

It took a huge amount of dedication that started from within the nucleus of the school and rippled outward to the whole community and beyond.

The school exemplifies a shift in 21st-century learning environments. Architect Kari-Elin Mock of the Cuningham Group in Denver, who worked on the project, describes the approach as finding ways to provide flexible learning spaces that allow students and teachers to work together creatively. “ACS’s small size introduced interesting opportunities to build a customized approach that gives them what they need at a very intimate scale,” she says.

The school also wanted buildings that connected both viscerally and physically to the landscape. Says Scott Lindenau, principal of Aspen-based Studio B Architects, which partnered with Cuningham Group on the project, “Many times, school design is a program in a box. In this case, the client recognized that the site warranted a top-notch building.” In an effort to create synergy between the new school, the surrounding landscape, and existing buildings nearby, the Studio B team chose building materials that reflected Woody Creek’s agricultural heritage. For example, they positioned the metal exterior siding in horizontal bands to echo the older log structures elsewhere on campus and create the feeling that the buildings were emerging organically from the landscape. The village feel that was so important in the original compound is supplemented by the new buildings—the school itself and a separate gymnasium—whose orientation toward big views of the Elk Mountains enhances the connection to the surroundings.

Highlighting some of the more unusual interior design elements, Studio B project designer Mike Piche cites the amount of display space requested for student art and the building’s lack of hallways. “The school has a non-precious attitude about its spaces,” he says. “They value materiality and the way in which the building can be brought into play with the group learning and artistic endeavors.”

Still to come in an eventual second phase of the project are a new music and sciencelearning center and a remodel of the administration building. The completion of the first phase indicates that the next one, too, will likely employ an all-hands-on-deck approach. Design committee member Erica Murray, who has a special appreciation of ACS as both an alumna and a current parent, sums up the experience:

It took a huge amount of dedication that started from within the nucleus of the school and rippled outward to the whole community and beyond. 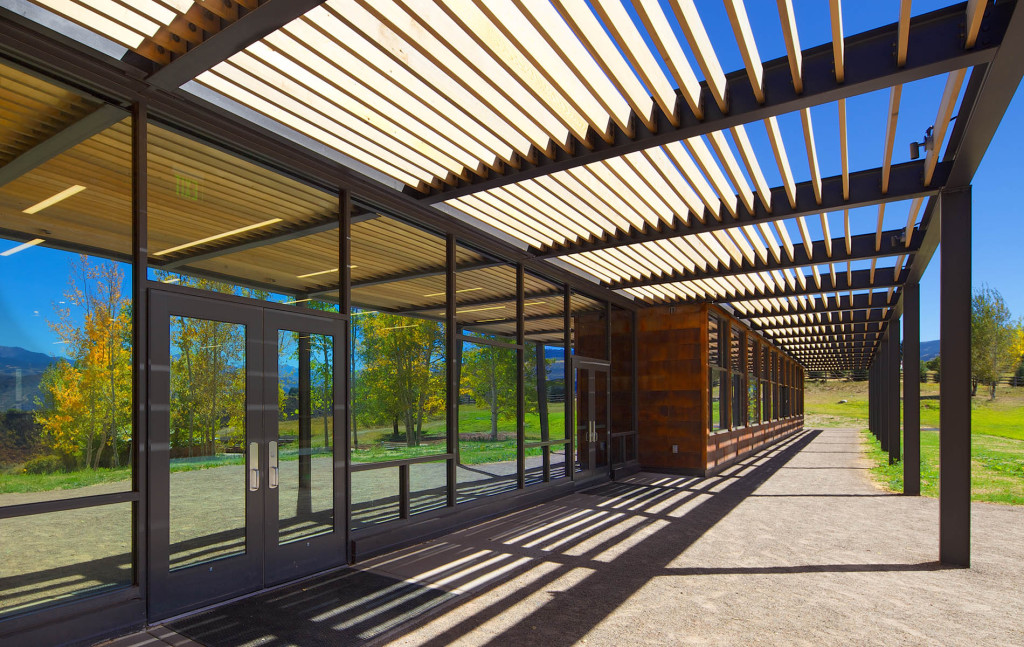 Read the full article on the Aspen Sojourner here.