Cuningham Group Reveals Details of All Net Resort and Arena 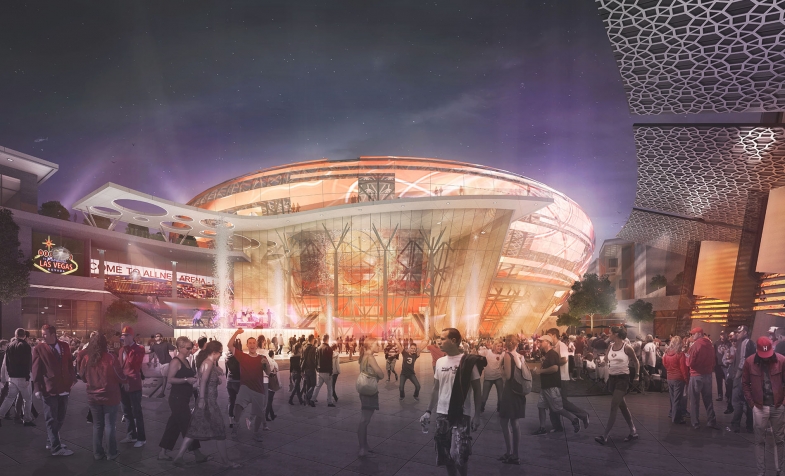 Cuningham Group Reveals Details of All Net Resort and Arena

LAS VEGAS, NEVADA -- Cuningham Group Architecture, Inc. (Cuningham Group®) has released details of its design for the All Net Resort and Arena to be built on the Las Vegas Strip. The $1.4 billion, privately funded development has broken ground and is scheduled to open early 2017. Its three main components include: an approximately 860,000-square-foot, Multi-purpose arena with unique retractable roof; Victory Plaza, a 300,000-square-foot pedestrian plaza; and a 44-story, boutique, five-star spa hotel with 500 specialty suites. Each of the three components offer attributes that are distinct to Las Vegas and significantly advance the art of entertainment design.

The details reveal a place that is far more than just a state-of-the-art arena and resort. Cuningham Group has designed a complete environment that responds to the vision of developer Jackie Robinson and embodies the spirit of Las Vegas. It is also a place with grand public gathering spaces for the people of Las Vegas. Cuningham Group Director of Resort Development Brett Ewing, a longtime friend and associate of Mr. Robinson, worked closely with him from the initial planning stages of the development.

“In almost every respect – from the culture, climate, business environment and urban energy – All Net Resort and Arena reflects the best the city offers and will offer the world,” said Ewing.

Cuningham Group Principal David Hyde said the design team asked themselves, “What is it about the Las Vegas climate and environment that will contribute to this becoming one of the most extraordinary arenas in the world?” The international firm brings to the project the vast expertise of its designers from a broad range of specialties, including hospitality, restaurants and retail, urban planning, casinos, resort destinations, theme parks and entertainment. Hyde is Lead Designer, joined by Principal and Director of Strategic Development Tom Hoskens. “The result is a world-class environment that advances that expression of luxury and excitement in the entertainment capital of the world,” said Ewing. With all three components – the arena, plaza and spa hotel – the impact is large, bright, dramatic and impressive – like Las Vegas itself. But it is not overwhelming. Cuningham Group’s designers have created a guest experience that is rewarding on the most individual level.

All Net Arena
All Net Arena will have one of the most striking appearances in the world of entertainment. The sleek spherical shape of the exterior is inspired in part by the barrel cactus found in Red Rock Canyon and other areas near Las Vegas. This organic, round profile is animated with brilliant light and color: The arena is sheathed in a matrix of LED screens, which will be programmed for dramatic visual experiences. Supporting the glass walls of the structure is a network of spines – again suggesting a cactus shell. Overall, there is sense of permeability and transparency, which is reflected in its indoor/outdoor orientation. All Net Arena is the only arena with a retractable roof – unique in the world and appropriate for the local climate. The exterior curtain walls of the venue may also be opened in good weather, allowing visibility and engagement from the street. All Net Arena will offer further indoor/outdoor experiences, including decks and terraces. And the concourses within the structure will be “outward focused,” with transparent walls and views to the surrounding streets and adjacent Victory Plaza. The Arena is designed to the specifications of National Basketball Association Professional Teams and Events. 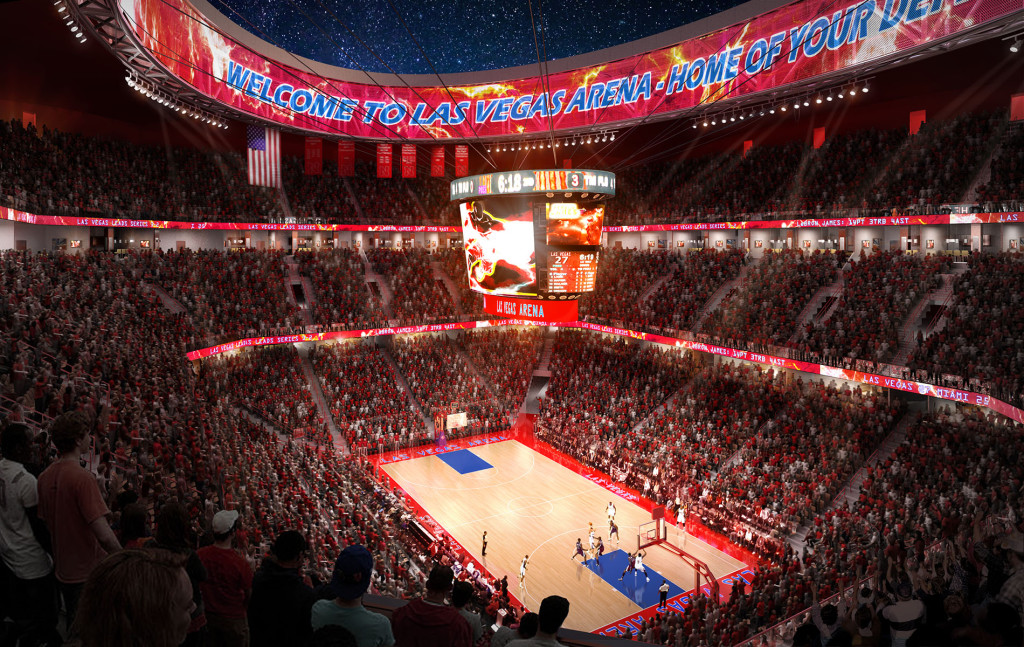 Victory Plaza
Victory Plaza is the 300,000-square-foot retail and restaurant streetscape designed for pedestrians. Like the arena, Victory Plaza will be animated with interactive lights and signage. Comparable to a Times Square experience, but authentically reflecting Las Vegas, this will be an area for both casual walking and social interaction, as well as public events and themed celebrations. The social interaction is vertical as well, with rooftop dining and dramatic balconies allowing all to participate in the theater of the street. The pedestrian streetscape includes lush landscaping, shade structures, the finest food and retail establishments with outdoor seating, staging and water features. Its circulation plan weaves people through the property from Las Vegas Boulevard (The Strip) to Paradise Road, connecting to the resort hotel and linking with Las Vegas’ monorail station. It offers a dramatic and enticing entrance from both The Strip and Paradise Road.

The Resort Hotel
The All Net Resort Hotel will be a lavish structure of 44 stories rising above the city. Bordered by SLS Las Vegas, the Riviera Hotel & Casino, Circus Circus and the Westgate Las Vegas Hotel and Resort, it will be the city’s newest landmark hotel on possibly its last premium location available on the Las Vegas Strip. The property features a luxurious Five Star Spa Hotel with 500 specialty suites, each containing a private spa area for in-room spa and salon services. Above the 44th floor is a rooftop pool and lounge with a breathtaking view of Victory Plaza and Las Vegas Boulevard. The hotel tower has been submitted to the FAA. Several specialty suites will boast an outdoor private pool terrace with dramatic views of Las Vegas. The Hotel will also contain an elegant restaurant with a private lounge, an exquisite wedding chapel and reception area, a specialty clothing and jewelry boutique, along with a full-service spa. A 16-screen cineplex with luxury movie theater is included in the project. And, it is a non-gaming resort, focused purely on Entertainment. 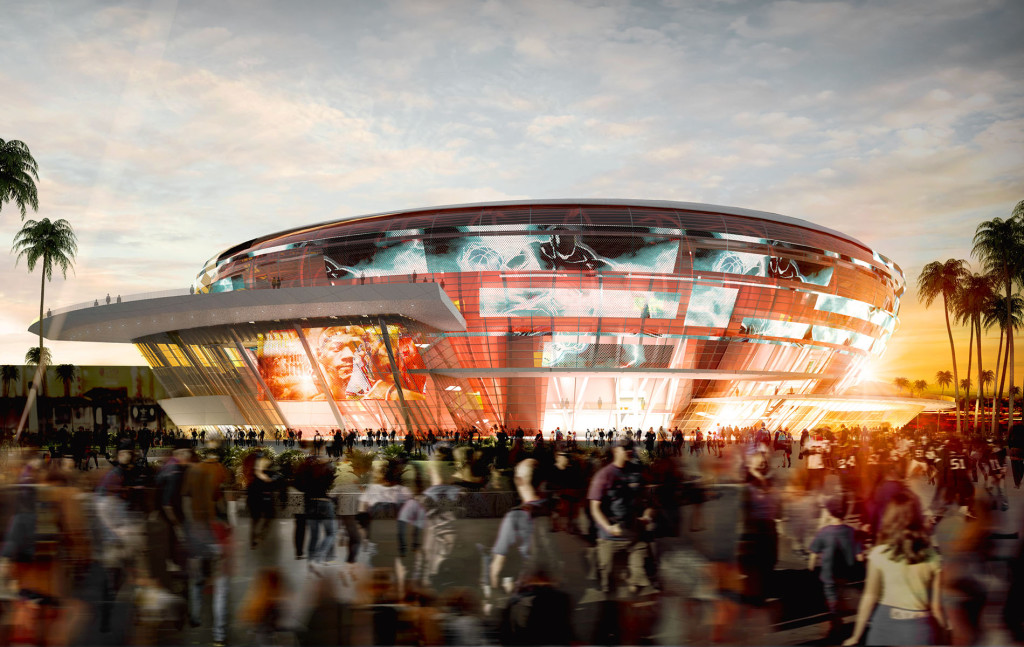